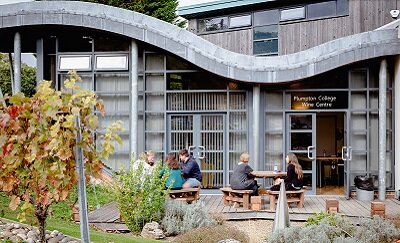 This year’s ‘Wine Talks’ will kick off with John Seccombe from Thorne & Daughters Wines with a discussion on Old Vines and New Wines on Wednesday 31st October.

A Plumpton alumnus, John completed his BSc in Viticulture and Oenology in 2007. His wine production experience at started at Newton-Johnson in South Africa in 2002 and he has since gone on to complete 19 vintages in five countries.

2012 saw the beginning of Thorne and Daughters Wines, where John, together with his wife Tasha, focuses on unique expressions of South African vineyards. Their style is natural, pure and uncluttered, preferring wines that speak quietly about their sense of place.

John’s talk will take a look at some of the old vineyards and personalities (young and old) that are defining the exciting wines being produced in the South African New Wave.

Brad Greatrix, winemaker for Nyetimber is also part of the series, and will be talking on Tuesday 20th November. Guests will have the opportunity to listen to Brad as he presents the Past, Present and Future of Nyetimber, the leading sparkling wine producer in the UK. Brad will explore the history of Nyetimber, its current wine philosophies, and what he believes the future holds for English sparkling wine.

This will shortly be followed by Charles Metcalfe, one of the most respected figures in the UK wine trade who will be at Plumpton on 31st January 2019. During his talks he will being exploring his life in wine and sharing his unique take on wines fashions, fads and future.

Finally, the Plumpton wine team are delighted to welcome Professor Tom Gilbert on 28th February 2019. Tom is the Professor of Palaenogenomics at the Natural History Museum in Denmark. His ‘Plumpton Wine Talk’ topic will be entitled; what can Ancient Roman privies tell us about the wines of today?

The growing of grapes and making of wine is one of man’s oldest technological achievements. Whilst archaeological evidence suggests that this process first stated in the region today encompassed by Armenia and Georgia, how the techniques and the grapes themselves spread and evolved through time is little understood. Resolving such questions is typically the focus of archaeobotanists, but, in the dawn of the current ‘Palaeogenomic era’, other approaches are becoming available to complement this study, one of which is the use of DNA. In particular, thanks to very recent technological developments, researchers today are able to extract DNA from preserved historic and archaeological specimens, and through comparison of this information against reference databases, draw remarkable insights into the past. In this talk I introduce how this works, and what this is teaching us about the domestication of wine.