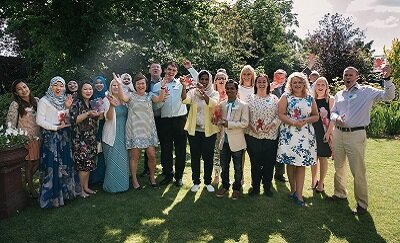 Amy Vaughan, a recent graduate of Level 3 Floristry at Plumpton, won UK Learner of the Year at the City and Guilds Lion Awards earlier this month.

Amy's highly developed skills in floristry led her to achieve distinctions in all of her assessments during her qualification with some very creative and innovative work and is what led her to being put forward for the award by her course tutor Sue Maguire. Her energy, determination and passion for the craft saw her lead a team to first place in a national competition at Covent Garden Flower market during her Floristry course.

For over 100 years, the annual City & Guilds Medals for Excellence programme has run to recognise success amongst both learners and tutors. This year over 85 Medals for Excellence have been awarded both in the UK and internationally. As well as being awarded with a medal, each medal winner is then in the running to win one of our coveted Lion Award trophies. The Lion Awards event – City & Guilds' most prestigious awards ceremony – which acknowledges the best of the best in a range of categories including our centres.

Amy studying both Level 2 and Level 3 Diplomas in Floristry at Plumpton. Since qualifying in 2016, Amy has become a Florist Support Worker at Plumpton College and last year also started her own business, Amyzing Flowers.