Plumpton College celebrate the success of their Apprentices 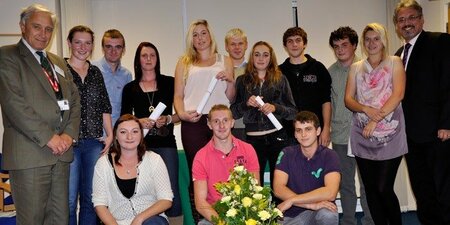 Plumpton College celebrated the success of their Apprentices at an Awards Evening on Wednesday 3rd October. Advanced and Intermediate Apprentices who had studied Agriculture, Horse Care, Veterinary Nursing, Horticulture and Arboriculture gathered with their employers, families and friends to recognise the achievement of the apprentices who completed their Awards during 2011/12.

Mike Hensman of the National Apprenticeship Service congratulated the Apprentices on their achievements and reported that the number of apprentices in the land-based sector had increased by 30% over the last year.

Dr David Stokes; Deputy Principal praised the commitment of the Apprentices and acknowledged how difficult juggling a course of study with full time employment is.  He thanked the employers and families for the support and encouragement they had given throughout the Apprentice’s course of study which contributed to their success.

Des Lambert, Principal of Plumpton College presented certificates to the Apprentices and to the Employers in recognition of their role in ensuring their Apprentice’s successful achievement.