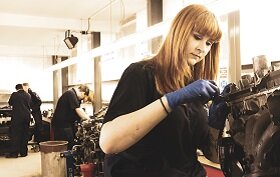 Sophie and Jade are two young women who have embarked on the mechanics course here at Plumpton College and aspire to make it their career. We wanted to ask them; why mechanics? What’s life really like at Plumpton College? And any advice they have for fellow women looking to pursue a career in the industry.

When did you first become interested in motor vehicles, and what was it that you found so interesting?

“I became interested at a very young age. I love that you can take any standard car from a factory and modify it and make something completely of your own.”

“I also became interested at a young age and particularly enjoy the challenge behind the design aspect and the ability to create something unique.”

When did you decide that you wanted to study the motor vehicle course at Plumpton, and are you going to pursue it as a career?

“I didn’t enjoy the college I was at before, I felt I’d be better suited and more comfortable to Plumpton. Yes, I do hope to go on to have a career in motor vehicle.”

“I spent several years looking for an apprenticeship but was unsuccessful, I then realised I could study a Level 2, so decided that would be the best place to help start my career.”

Why did you choose Plumpton?

“I wanted somewhere to work without distractions of knowing all the students, I wanted a fresh start. It’s working well here.”

“I had previously heard great comments about the college and the staff, and when I compared that to other establishments it was a no brainer.”

How are you getting on at Plumpton, what is the best part about studying here so far?

“The best thing is the way you’re treat as an adult, an equal, they don’t treat you like school children and it really gives you the chance to grow and gain independence.”

“The campus at Plumpton is just beautiful, it’s a wonderful place to study and the motor mechanic facilities are great. The students are also all really friendly.”

What would you say to inspire more girls into the industry?

“Just because it’s a male-led industry doesn’t mean women can’t do it. Customers actually like to deal with female mechanics because they feel they can trust them not to rip them off, not that all male mechanics do. Gender shouldn’t define what you do.”

“Don’t be scared. I was terrified before I started, and the male students could not be friendlier and more supportive. I don’t get treated any differently.”

Here at Plumpton College, we are proud of our near equal split of male and female identifying students. Breaking boundaries is part of what we do, while Jade and Sophie currently make up a small percentage of the student body in the mechanics department, other departments such as our Agriculture Level 3 cohort are now over 40% female. We are also offering a female only Football Academy in conjunction with Lewes FC – the first football club in the world to campaign for equal pay for both their female and male players.

Break the stereotype, pave the way for other young women and join us at our next open event.