This year, Plumpton College and Orebro University started an ERASMUs teaching mobility exchange program.  In February, we welcomed Orebro university lecturer Anna Rönngren to Brighton to deliver lectures on her specialties, which included cellaring wine, menu design and the Swedish alcohol monopoly.  Besides participating in a series of teaching activities, Anna also had the opportunity to visit two local vineyards.  Plumpton College student Hugh Corney gave her a tour of Court Garden Winery and a tasting of their 2013 wines. Anna also participated in a wine tasting at Ridgeview winery, which is pioneering the export of English sparkling wine to Sweden popit.nu/vin/anna-tar-tempen-pa-engelskt-mousserande-vin/.

Then in March, the author (Tony Milanowski) returned the favour by travelling to a wintery Sweden to visit the Grythyttan School of Hospitality, Culinary Arts & Meal Science, part of Orebro university campus in the famous Culinary town of Grythyttan.  Grythyttan is a small and unassuming town with less than a 1000 full time residents, located about three hours west of Stockholm on the way to Oslo.  However it is famous for the Grythyttan Gästgivargård, a guest house established in 1640 and one of Sweden’s leading restaurants.  In 1990, lobbying by Carl-Jan Granqvist, the owner of Grythyttan Gästgivargård, pave the way for the establishment of the campus of Orebro University in this rural idyll.  With over 400 students, Grythyttan is now at the heart of a burgeoning food and drink scene.  This vibrancy is best demonstrated with the amazing Måltidens Hus building which houses the culinary school and dominates the town.  Originally built for the 1992 World Fair in Seville, it was transferred to Sweden, where it took up a new lease of life a state-of-the-art food and wine school.  The magnificent multilevel building is equipped with a wine cellar, banqueting hall, and commercial kitchens and teaching kitchens, as well a magnificent library and Tore Wretman’s Gastronomic Literature Museum.  Located nearby are offices, student spaces, sensory and microbiology laboratories, which allow students to successfully obtain a Bachelor in Sommelier and Culinary Arts and Meal Science which is Sweden’s only undergraduate sommelier program. 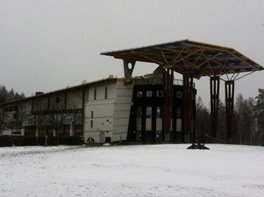 Over the next two days I delivered winemaking sessions to 18 first year sommelier students.  First port of call was to explain how an Australian winemaker, teaching in an English College, ended up in Sweden to teach them.  Then the students were introduced the Plumpton College program, and the state of the English and Welsh wine industry.  To finish this section, we staged a tasting of Plumpton Dean Blush, which was the first English sparkling wine most students had ever had the opportunity to taste.  Most of them gave it a Swedish seal of approval, and suggested it was a viable alternative to many Champagnes on the Swedish market.  After that we got down to the nitty-gritty of working definitions of quality  and defining the role of the winemaker and the requirements of the customer.  This knowledge can help these new sommeliers ensure they recognise wine quality in all its guises and make informed decisions.

After those intensive sessions, it was time to enjoy some of the food from the famous Grythyttan Gästgivargård and eat in the dining room frequented many times by Agnetha, Anni-Frid, Bjorn and Benny of ABBA fame.  For a winemaker, the Grythyttan Gästgivargård is particularly special, as it houses one of the best aged wine collections of any Swedish restaurant.  It was very enjoyable to match some fully mature wines with fresh, seasonal, local Nordic cuisine.  However it was to be an early night as there was much teaching to be done and then long return journey to the UK.

Day two of teaching covered the winemaking process, with a particular emphasis of the knowledge sommeliers need to recognise how winemaking decisions influence the taste and cost of the final product.  Whilst there was much information to cover, we did take the opportunity to do some practical demonstrations of tannin management (these students are now expert tea brewers), and tasting (recognition of different oaks and toasts) as well as learn a few choice phrases of Strine (Australian slang).  After a second successful session, it was time to pack the car and travel back to Arlanda airport, Stockholm, and the evening flight to Gatwick.

This initial ERASMUs exchange has proven to be a real success, and both schools are looking forward to more co-operation in the future.

Exchange program was made possible with the support of the Commission of the European Communities within the framework of the LLP Erasmus Programme.

Diclaimer: The content of the publication is the sole responsibility of the publisher and that the European Union is not liable for any use that may be made of the information.