Students celebrate the changing of seasons 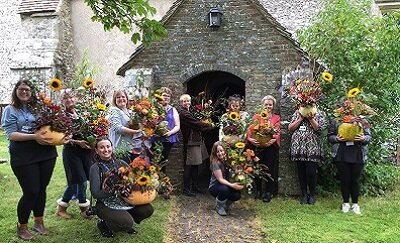 The start of the new academic year is always a busy time in the college calendar with new and returning students joining us for their studies. Autumn is also a busy time for our different departments who are involved in many activities out and about in the South Downs.

Last month, students helped the local village prepare for Harvest. Preparations kicked off with the maize harvest collected by agriculture students. Floristry students decorated the 12th century St Michael’s Church, on site at the college in preparation for the harvest festival service. The church was filled with pumpkins, and large displays of autumnal flowers on the walls and window sills. The chancel was full of opened sun flowers.

The Reverend Godfrey took a service of harvest evensong with many familiar hymns and readings, giving thanks for a successful harvest. Principal Jeremy Kerswell read a lesson and student Beth Keyzer gave the thanksgiving prayers. Afterward the congregation collected in the student’s union common room for a harvest supper.

Harvest is also a time for the students to collect donations of food for the local foodbank.  Last week students Calum, Sky and Danny delivered these to the Landport Foodbank in Lewes. Debbie Twtichen, who runs the foodbank, will be returning to Plumpton to talk to students about foodbanks, how they work and why they are important for the local community.

The last grapes of the Plumpton College of 2017 were picked by our wine students on Friday 20th October, marking the end of a challenging year for the college vineyards.

A warm and sunny March lead to a slightly earlier budburst for most varieties, but this was followed by a devastating air frost on the night of the 26th April, which destroyed up to 80% of the new flower-bearing growth. For the first time ever, vineyard thermometers showed temperatures as low as -5.8°C after budburst. Secondary growth looked promising with a hot June and July, but August, September and October turned out to be cool and wet, slowing down the ripening period and providing ideal conditions for fungal diseases. Another problem was the arrival of a new pest from Japan, the spotted-winged drosophila. The female of this fruit fly has the ability to lay its eggs inside healthy ripening grapes, thus causing them to rot before they ripened. The red varieties were particularly affected, but it was good to see the first crop of Riesling come in healthy and surprisingly ripe! “Overall, a very tricky year!” said Tom Newham, the Vineyard Instructor.

Nevertheless, the students were determined to celebrate the end of harvest in the usual way with a great party, starting off in the Wine Centre at Plumpton. Mary Bridges and Gareth John were judged to be the top first year grape pickers, and Marco Royo-Gota was top student winemaker. It’s now up to the second-year production students, under the close supervision of Sarah Midgley, our winemaker, to conjure up another vintage of prize-winning Plumpton wine.

In January, the first year production students will start the cycle again; pruning the vines and preparing the vineyard for the 2018 season. Let’s wish them an outstanding harvest in 2018!

Students and staff will now be preparing for the next information event where we open our doors to prospective students. Join us on Saturday 11th November 9am – 12pm.