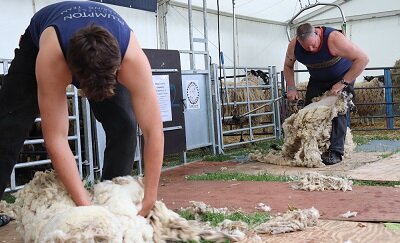 Plumpton College was spread far and wide at the South of England show, with each department that attended proudly representing the college and illustrating their expertise.

During their time at college, four students took advantage of the sheep shearing training offered as part of their studies on Level 3 Agriculture which took part over three days. All four students achieved a British Wool Blue Seal of Approval, having passed the assessment to shear three sheep in thirty minutes. One student, progressed his training to achieve the Bronze Seal, shearing six sheep in thirty minutes.

Tom Evci was invited to take part in two radio interviews, one for More Radio and one for BBC Radio Sussex that was broadcast on the drive time show.