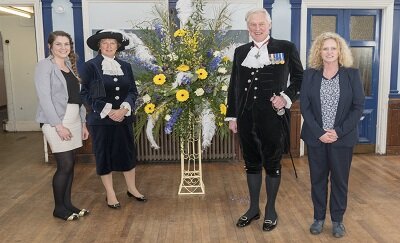 The new High Sheriffs of West and East Sussex have begun their year in office with a formal Declaration Ceremony at Lewes Crown Court - continuing a tradition that stretches back for more than 1,000 years.

Mrs Caroline Nicholls DL, from Worthing in West Sussex, and Major General John Moore-Bick CBE DL, who lives in Ewhurst Green in East Sussex, will both serve as The Queen’s representatives for law and order in their counties, lending active support to the Judiciary, the Police and other emergency services. They will also take an active part in supporting and promoting local voluntary organisations.

The two High Sheriffs were joined in court by the Lord-Lieutenant of West Sussex, Mrs Susan Pyper and the Lord Lieutenant of East Sussex, Mr Peter Field, Chief Constable of Sussex Giles York QPM, senior Judges and representatives of the emergency services, county dignitaries and family and friends. Each took their oath of Declaration before High Court Judge The Hon Mr Justice Jeremy Stuart-Smith.

The voluntary appointment is for one year; Mrs Nicholls succeeds Lady Emma Barnard, of Parham House, in West Sussex, while Major General Moore-Bick takes over from Mrs Maureen Chowen, from Brighton.

Mrs Nicholls is a journalist and a former communications director at Gatwick Airport; she plays an active part in the county’s voluntary sector, including as a founder Trustee of Sussex Community Foundation and is a Deputy Lieutenant for West Sussex.

She said: “It is a great honour and a privilege to be selected - and I look forward in particular this year to highlight those who support and encourage young people to combat disadvantage and fulfill their potential, as well as those who protect us and keep us safe. It will be a fascinating and rewarding year.”

Major General Moore-Bick was a Royal Engineer, a bridge builder, linguist and international staff officer, whose roots lie in agriculture and forestry. Returning to his native Sussex, he has held several military appointments, is a Deputy Lieutenant and a governor of Plumpton College.

He said: “growing up in East Sussex, its wonderful landscape impressed itself upon me early in life, and remained in my mind as HOME when in many far-off places.  East Sussex supported me through school and university, and the honorable office of Sheriff gives me another opportunity to serve those who are setting out in life, and support those who underpin the secure framework of our County. I look forward to meeting many old friends and making many new, building bridges between those who can work more effectively together for the public good”.

Each High Sheriff appoints an Under Sheriff for the year to assist them in their duties - This year’s Under Sheriff is Mr Kevin Smyth, from Ditchling, a solicitor and a Trustee of the Martlets Hospice in Hove. This follows the retirement of Kevin Taylor, from Arundel, who served as Under Sheriff for both counties for seven years.

The High Sheriffs have also appointed a Chaplain for each county: Revd Canon Jonathan Baldwin, from Gatwick, for West Sussex and Revd Paul Mundy, from Newick, for East Sussex.

The Office of High Sheriff is an independent non-political Royal appointment for a single year. The origins of the Office date back to Saxon times, when the ‘Shire Reeve’ was responsible to the king for the maintenance of law and order within the shire, or county, and for the collection and return of taxes due to the Crown. Today, there are 55 High Sheriffs serving the counties of England and Wales each year.

Whilst the duties of the role have evolved over time, supporting the Crown and the judiciary remain central elements of the role today. In addition, High Sheriffs actively lend support and encouragement to crime prevention agencies, the emergency services and to the voluntary sector. In recent years High Sheriffs in many parts of England and Wales have been particularly active in encouraging crime reduction initiatives, especially amongst young people. Many High Sheriffs also assist Community Foundations and local charities working with vulnerable and other people both in endorsing and helping to raise the profile of their valuable work.

High Sheriffs receive no remuneration and no part of the expense of a High Sheriff’s year falls on the public purse.