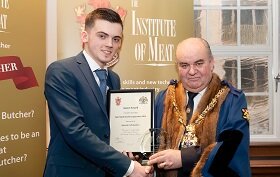 Austin Howell, an apprentice with Plumpton College was named National Retail Butchery Apprentice of the Year at the Institute of Meat Annual Awards, held at The Butchers Hall in London, on 20th February.

Austin, who competed against apprentices from around the country, works for Priory Farm Shop in South Nutfield and has been training with Plumpton College for two years. He was presented with a certificate of achievement and a cheque for £250 by Keith Fisher, Chief Executive of the Institute of Meat.

The Awards has been running for over a quarter of a century and seeks to recognise and celebrate individual achievement in the meat industry. Commenting on the awards, Fisher, himself a fourth generation Master Butcher, said,

Every year I’m astounded at the quality of the nominations and it makes me very proud to award such deserving apprentices. They are the future of our industry, and from the winners we’ve awarded this year I feel it is a future in very safe hands.

Austin has been a very good Apprentice and deserves this prestigious award. He is now doing the Level 3 Butchery Apprenticeship and will still be part of the Plumpton Butchery Department.

For information about meat industry apprenticeship training join us at the next Open Event or contact us here.