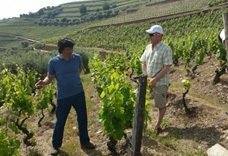 This wonderful trip was part of the new MSc course in Viticulture & Oenology module on viticultural climate & terroir. It was co-funded with the generous support of the South of England Agricultural Society.

We arrived at Porto airport on the 11th of May and were greeted at the airport by our contact in Portugal and Erasmus student Thomas Grundmann, currently studying at the University in Villa Real, UTAD. First stop was one of the main centres for research into sustainability in Portugal, a privately-funded organisation paid for by the local growers concerned by the future threats of climate change. Cristina Carlos gave an excellent presentation on the current research and education programmes into improving the resource use of the Douro region, managing to maintain the UNESCO heritage site unaltered. After a brief visit to the museum with information of the history of the region in Regua we travelled back to Villa Real to attend to a talk at the department of Oenology at UTAD.  The evening was restful and settled in having a pleasant traditional meal at the local Portuguese restaurant in a barrel after a review workshop.

The morning started with a road trip through the Douro valley to a quality producer at Quinta das Carvahlas. The professors from UTAD accompanied us for the trip and we were shown around the vineyard with an explanation of the Douro philosophy. The vineyard had embraced many sustainable practices, with water catchment and irrigation, intercrop planting between the vines to boost biodiversity, they had also develop a strategy of planting on the slopes that reduced the use of herbicides during the growing season. This was followed by a wine tasting, with impressive reds and white wines as well as a 1976 Port. 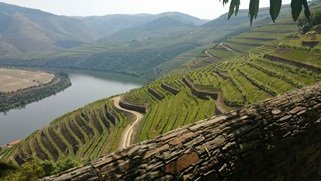 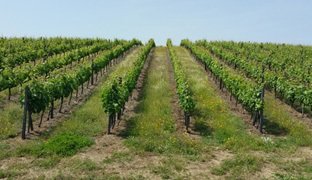 The next visit was shorter to a smaller producer, Quinta de Foz, again in Pinhao. We saw the traditional large granite troughs and tasted wines made by using local Portuguese oak, instead of American and French oak, experimenting with locally sourced materials (Figure 2). 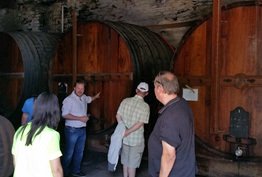 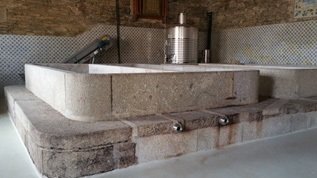 A short lunch break was in order afterwards by the river and a larger scale producer, Quinta Napoles and the newly designed winery that had been created to integrate into the Douro environment. Here the winery used the natural heat from the stone to act as a heating buffer, providing a cooling effect in the summer and warming in the winter to reduce costs and reduce resource use.

We than had a rapid visit of the working winery (Figure 3) and tasted many different unfinished wines that were undergoing different stages of the production phases. This was interesting to discuss with the wine maker, particularly about different harvesting strategies. We also had the opportunity to sample organic wines and biodynamic wines.

After the visit we returned to Villa Real, en route we decided to visit a traditional method sparkling winemaker called Vertice in a town called Alijo. It had been supported by American producers in the 80’s who had looked at the many grapes of Portugal, some 750, and had determined that there were suitable grapes other than traditional Chardonnay, Pinot Noir and Pinot Meunier that local producers could grow to create a product with the method used in Champagne. After an interesting tour of the winery, that was in an old fruit storage warehouse, we returned to Villa Real for a well-earned glass of wine and dinner.

The day began high in the mountain slopes and windy roads of the Douro valley travelling to an organic leaning producer at Quinta do Infantado near Pinaho (Figure 4). Unfortunately the rental car’s gear box gave up. Luckily we were not far from the Quinta and were joined by our guide Joao Rose who discussed frankly the pros and cons of having organic wines. He discussed that there had been a vast improvement in organic wine quality and was now competing with non-organic wines. However he thought that the true energy costs of organic wines compared to non-organic wines were more difficult to determine. Due to the incredibly steep slopes of the Douro valley, even though the terracing system helped, many of the upper slopes were not terraced. Terracing and planting 1 hectare was in the region of 55,000 euros so many of the upper slopes, which were classed differently were sloped, were not planted. This meant that mechanical weed control was problematic and had high fuel and oil costs attached. When compared to the two passages required with herbicide, the social cost and other costs were less. This gave our group a valuable insight and related to a discussion point about how people frame sustainability and relate it to them. The three tranches of social, financial and environmental sustainability and some areas have a greater impact on the choices of the producers in the region. 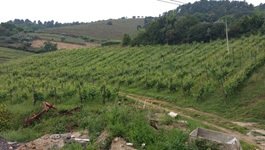 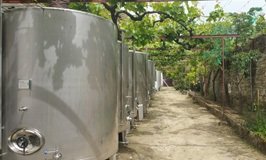 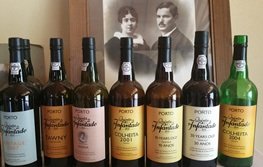 After seeing the winery and sampling the fantastic selection of ports and wines produced our recovery taxi appeared and took us to Porto to pick up the new hire car and gave us the opportunity to visit the great port houses of Porto and discover the history around the city. We visited Grahams (Figure 5), as Izzy one of the MSc students had worked there the previous summer and had a specially tailored tour around the cellars followed by a tasting. Afterwards we had a leisurely stroll along the Porto River and famous St Louis Bridge to a tapas style restaurant trying the exquisite regional food. After our first meal of the day we headed back to Villa Real and had a small dinner at a local pizzeria of Italian Portuguese fusion and headed back for an early night. 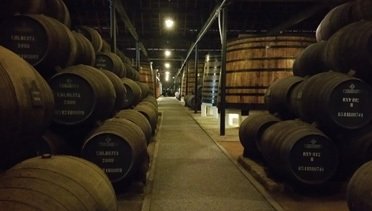 After breakfast we travelled to one of the most advanced wineries in Europe, a very technologically winery in Alijo, the porto-cruz Gran Cruz winery (Figure 6-8). The modern winery cost in the region of 14 million euros and processed 6 million kilograms of grapes and 600,000 kg of premium grapes and had the latest technological advancement and planned efficiency methods.

We were greeted by the head wine maker, Jose Manuel Sousa Soares who gave us a personal tour of the winery. It was amazing to see many of the discussed topics from the previous courses of new winery technologies such as nitrogen capture and automatic must sensory equipment. The site was open to the environment, boarded by wooden slats and had won awards for the design allowing a cooling breeze in the summer months reducing costs. The winery had a strong focus on high quality wine while maintain high  environmental standards with a water processing plant attached as well as modern cleaning methods and safety areas in case of an explosion due to the high degree of alcohol contained in the tankers. After the tour we sampled some currently unreleased port as well as some port as old as 1971 and were given a bottle each. 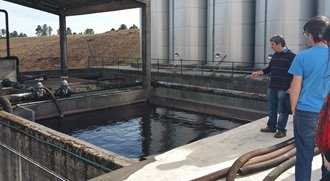 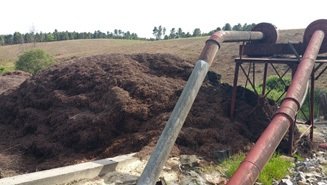 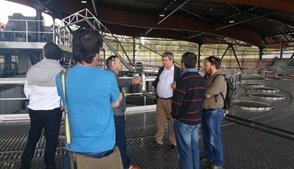 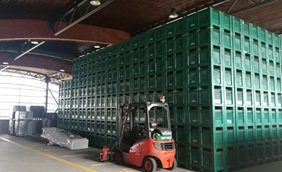 Afterwards we made a trip back to the University in Villa Real (UTAD) and engaged in some open lectures. Our tutor, Alistair Nesbitt gave a lecture on the growth of wine production in the UK. Many of the Portuguese people were interested and surprised that the UK was growing wine and had many questions. Helder Frega, a climate change scientist gave a lecture about the changing climate of the Douro region and Portugal as a whole and the potential problems and challenges that face the indigenous and varied grapes that are grown in Portugal and the threats and mitigations that the region is responding to. Ironically the benefits of climate change that the UK is seeing are also the problems that are facing Portugal. Afterwards we travelled to the local cooperative winery in Villa Real and looked at the waste water treatment. This was dramatically different form the winery seen earlier in the day but they still had a focus and strong philosophy on maintain good environmental standards and operating to a tighter operating profit.

Afterwards we returned to our hotel and met together with the students for a meal and tasting different Portuguese wine and also sample some Plumpton wine that fared well. The night lasted late and was enjoyed by all the students, meeting the different masters’ student from the oenology department and the local quintas we had met, potentially arranging a harvest for the coming season for one of the students with Quinta de Foz.

At breakfast and the morning of the last day, we had a consolidating workshop with our tutor, discussing the different sustainability and mitigation challenges that we had met and how they could be relayed and implemented in the wine industry in the UK that is in its infancy. Afterwards we travelled to Quinta Alves de Sousa (Figure 9). This was another modern winery in the similar vein to the Neeport winery seen in Pinahao on the second day. The son, Tiago, showed us around the vineyard and discussed the planting strategies involved in the site. Many of the plants are harvested all at once and they choose to have multiple varieties of grapes included in their wines. After discussing the different practices in the vineyard with Tiago he showed us around the winery and the modern flow method that they had. Afterwards we sampled the wines, which were all fantastic and left for the airport to return to the UK. 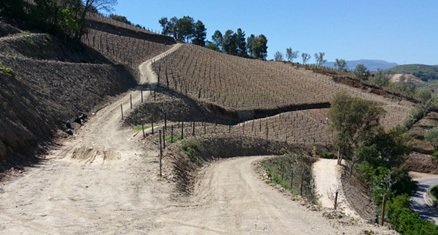 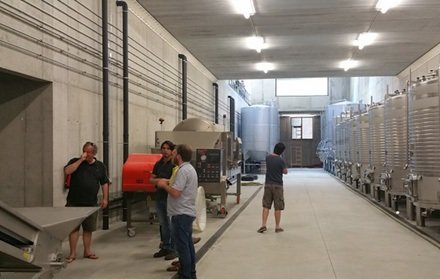