Looking back at Remembrance Day history 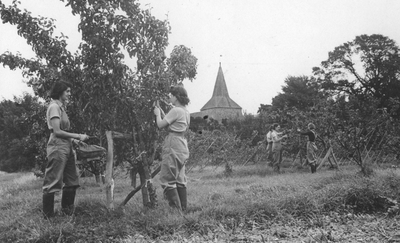 Today marks the 103rd anniversary of Remembrance Day, a day we remember those who have heroically fallen in battle since the first world war.

The first Remembrance Day took place on November 11th at 11am in 1919, one year after the Armistice agreement was signed by the Allies and the Germans in Compiègne Forest, in France. Though Plumpton College did not exist during the First World War, Little Wales Farm did and grew rapidly due to a lack of imports. With German U-boats limiting all trade, British farming had to lead the way in feeding a nation in a time of crisis. The war, in many ways, changed the course of agriculture with more than 170,000 male farmers in the trenches and up to half a million farm horses used by the war office; traditional ways of doing things could no longer continue. The UK government invested the equivalent of $3.3 million into tractors, and the women’s land army was born, providing 98,000 female workers in the first world war. The women's land army came into effect when in 1917, the country had an excess of three weeks' worth of barley to feed the nation; it was then that women registered to work in agriculture, leading a revolution.

The college and the surrounding countryside were hugely different back in the 1930s. The South Downs were covered with blooming hawthorn trees and ragwort bushes standing tall and proud. Tiny yellow and black caterpillars claimed this land and could be seen all around at the right time of year. Honeysuckle dominated the area, causing a sweet smell intertwined with the rich aroma of berries and gorse. Budding with life the Downs, particularly Blackcap, were a popular spot for the children of Plumpton and surrounding areas to play and lose themselves in, creating idyllic childhood memories. This, however, all changed at the beginning of World War Two; no parts of our nation were untouched by the devastation of war.

On September 3rd, 1939, Britain and France declared war on Germany, the beginning of a bloody six-year battle between Nazi Germany and the Allies. Our educational institute was only 13 years old in 1939; it suspended its regular running of courses and adapted its teaching to serve the Women's Land Army. We opened our doors and trained over 2,000 to efficiently and effectively teach them how to work on farms to help feed the country. Initially, courses started out being six weeks long and then grew into specialist courses making women farmers as diligent as their male counterparts. At Plumpton College, we specialised in haymaking, milking and growing mangolds to feed cattle.

Though Plumpton College estate is a small place in the grand scheme of things, it did not go unscathed from the destruction of bombs and doodlebugs. On one chilly January evening in 1941, a German bomber plane came roaring past Little Wales Farm low in the sky, struggling to stay in flight. It flew chaotically out of control past the greenhouses and made it across the road, where it hit a tripwire and pummeled into the ground killing all five crew members instantly. Smoke billowed into the air at the foot of the Downs just opposite the main college building. The men were later buried in St Michael's Church graveyard with a small white cross marked 'Unknown German Airmen' to remember them by. Their bodies were later exhumed and laid to rest in Germany. Unknown to people at the time, lay a dormant bomb in the field that remained there untouched until August 1993 when it was detected.

Accounts of broken tanks at the top of Little Wales Lane were also prevalent at the time. Children of the village saw this as an excellent opportunity to play in and amongst the machinery with little idea of the power such tanks held. Chris Campbell, a child of a Plumpton College lecturer at the time, can only recount happy memories of playing with his friends on the Downs and in the tanks. It seems impossible to imagine seeing broken tanks or men being trained to serve their country in the bravest way on the beautiful South Downs. Even if we cannot account for any stories of Plumpton College students who fought in the war, we can remember how the small village of Plumpton and the college contributed to helping to feed the nation at this challenging time. Without training institutes and adaptive ways of farming, the country would have been in a desperate state.

Lest we forget all that fought for our freedom and those who worked the land to feed our troops and their loved ones at home.