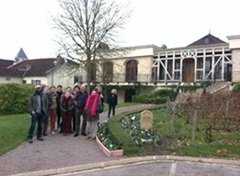 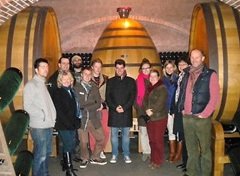 Visiting Champagne Drappier in the Côtes des Bar, the students walked down into cellars that were constructed 800 years ago by Cistercian monks.  They saw an impressive array of bottle formats, a modern gravity flow system and beautifully constructed wooden vats – one in the biodynamic shape of an egg.

They were invited to taste both Pinot-favoured and Chardonnay-only Champagnes in Drappier’s elegant salon, where they learned about the reintroduction of older grape varieties Arbanne, Petit Meslier and Blanc Vrai  (Pinot Blanc).

Afterwards the students visited an even larger establishment, the cooperative Chassenay d’Arce.  Here instead of walking underground, the students climbed up and along elevated steel passageways spanning vast rooms containing eight-ton presses and gleaming stainless steel tanks.  The winemaker offered tastes of base wines or Vin clair with different characteristics that he uses to create blends for the second fermentation.  There were reserve wines from different vintages of Chardonnay and Pinot noir spanning 2003 to 2012. 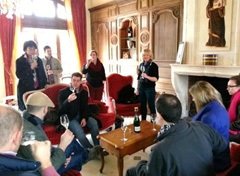 Travelling further south to Dijon, the students spent the next three days assessing white, rosé and red sparkling wines at the 10th annual Effervescents du Monde www.effervescents-du-monde.com&nbsp; This was the main purpose of the trip and naturally it carried some weight of responsibility to the global fraternity of winemakers.  The students gained a glimpse of how their own sparkling wines might be judged one day.  To prepare for the event, they had practiced using a specialised scoring system and attended supplementary lectures by Professor Richard Marchal (University of Reims) on the origin, quality and longevity of bubbles and Jean-Claude Buffin on the improved understanding of sensory perceptions and ways of interpretation. 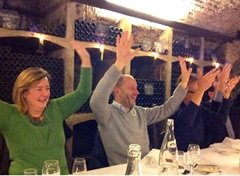 An array of over 500 samples had been submitted to Effervescents du Monde, using many different grape varieties and vinification techniques.

Five judges commented on each wine and gave scores for appearance, aroma, taste and harmony.  After finishing each day’s assessments, all the judges were invited back into the hall to see the labels on the bottles and taste or re-taste any of the wines that had been judged that day.  It was an opportunity to compare and contrast, share opinions and appreciate the diversity of styles and packaging.

Excellent three-course lunches were provided each day by the students of the Lycée Castel Culinary School in Dijon.  An evening of celebration was hosted by the wine producer Boisset at their cellar in Nuits-Saint-Georges, where judges dined together by candlelight, entertained by stories and joining in with song (one of which will surely feature at the next Plumpton harvest party).  Surrounded by bottles of Burgundy from vintages spanning the 20th century, the students had a chance to talk to the organisers and other judges who came from many facets of the wine industry including master blending, barrel making, winery inspection and wine journalism.

The group also visited l’Imaginarium in Nuits-Saint-Georges - a centre with miniature models of wineries, a collection of wine aromas, old vineyard tools, amusing interactive displays and short films designed to explore the mystery of the vine.  The visit finished with tastes of at least half a dozen Burgundian sparkling wines.

One of the evenings was spent with students from the MSc Wine Business program at  ESC Dijon Burgundy School of Business.  The Plumpton contingent began by leading five WSET-style tastings of non-French wines – not easy to find in France apparently.  In turn, the Director of ESC Wine Marketing Dr Damien Wilson and his students led an exercise to formulate the best marketing strategy for a new wine from Turkey. 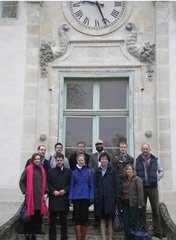 Ideas were gathered and then Skype was used to contact  Sarah Abbott MW, marketing consultant to the Turkish winery, to hear her views.  At the end of the evening, Tony Milanowski challenged all the students to deduce the style and origin of a mysterious wine he had brought with him.  The deserving winner of the contest Miguel Cruz Liljegren (alas an ESC student) was awarded the first annual Wilson-Milanowski Cup. 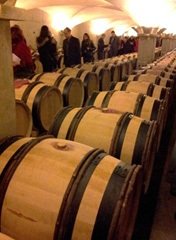 The students gathered with the crowd outside the gates of the Cuverie des Hospices de Beaune, gaining entrance with the help of Professor Pascal Durand (University of Burgundy).  Inside the barrel rooms, visitors walked up and down each row in a manner steeped in tradition, with aides dispensing tastes from 30 barrels of Pinot noir, each from different vineyards, and 13 of Chardonnay.  After the 43 samples, Professor Durand led a private tour of the winery where students saw dozens of open topped fermentation tanks (grapes from each of the Hospices’ vineyards are vinified separately) and an automated punch-down device which reaches each tank by travelling along a track attached to the ceiling.

The 140th Fêtes des Grands Vins de Bourgogne in Beaune was an opportunity to sample 3,000 wines including many of the Grand and Premier Crus.  The students were joined by Fabrizio Bucella, one of the other judges from Effervescents du Monde who was reporting on the Fêtes for the Huffington Post.  He led them through tastings of great wines from the vineyards of Nuits-Saint-Georges, Puligny-Montrachet, Gevrey-Chambertin, Auxey-Duresses, Vosne-Romanée and Éschezeaux.

At the end of the week, students reflected on the different aspects of International sparkling wine production and wines of Burgundy they had explored on this tour. It was hard to imagine a more enjoyable way to learn about history, traditions, processes, innovations, quality.  Plumpton’s Wine Department look forward to participating in next year’s Effervescents du Monde with a similar tour for new students November 11th-16th 2013.  The next Plumpton contingent will be under pressure to win the Wilson-Milanowski Cup back from the ESC Dijon students!