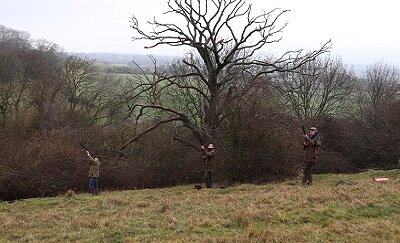 On Saturday 10th March, the gamekeeping department hosted their first simulated clay shooting day. The day consisted of four drives and 3,500 clays being distributed over the guns. The team of guns for the day were a mix of ex-students and friends returning to the college.

A simulated clay shoot consists of clays being thrown over guns to simulate the more expensive sport of game shooting. The simulated days are often used as practice during the close season, social occasions, team building and corporate events.

The day kicked off with welcoming teas and coffees at 09.30, followed by a safety briefing on the plans for the day and the checking of insurance details. At 10.00 the first drive began with clays being distributed equally between the 10 guns. After the drive finished we stopped for elevenses and all the guns were able to discuss their shooting abilities.

The second drive started around 11.30 with high target clays really testing the skill of the guns. Lunch followed around 12.30 with fresh homemade rolls and finger buffet food all made by the catering department. At 13.30 the guns prepared for the third drive with more cartridges being fired producing hot smoky barrels. After a quick stop to catch up on performance and to let the barrels cool down the guns completed the last drive. With empty cartridge boxes and happy faces it was clear to see the guns had enjoyed their day. The guns returned to the game building for tea and coffee prior to settling up.

If you would like to join us for a clay shooting simulated day or find out more about our courses you can contact us here.