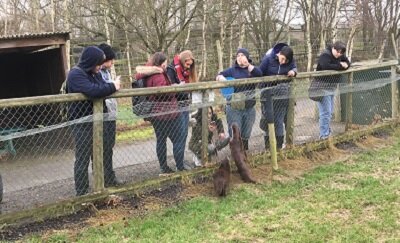 On Friday 12th January, the Level 1 Animal Management students took a very successful trip to the British Wildlife Centre, and as it was closed to the pubic we were fortunate to have exclusive access to the centre.

Students were taken on a tour of the Centre from Meg, who gave a very informative and inspirational talk to the students about her role at the Centre. In addition as Meg was a previous Plumpton College student who had progressed from a Level 1 to a Level 3 course before securing her job, so she was able to demonstrate to the students the value of hard work towards a goal in order to achieve their career aspirations.

Megan also gave a very knowledgeable talk about each of the animals held at the Centre, including their welfare and husbandry requirements. The students were even able to observe and be involved in feeding of the some of the animals including, Badgers, Scottish Wildcat, Otters, Stoats, Deer, Foxes, Red squirrels Muntjac deer, Owls and Buzzards.

A very enjoyable and successful day, the students were extremely engaged and interested throughout, asking lots of questions as well as being impeccably behaved as representatives of Plumpton College.